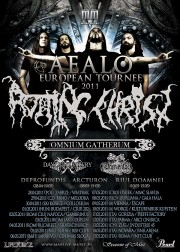 Omnium Gatherum have released an official album teaser for their upcoming new album “New World Shadows” to be released in Europe on February 7th and March 1st in North America on Lifeforce records.

Omnuim Gatherum is currently planning on April tour with Rotting Christ that will see then destroy the European continent.