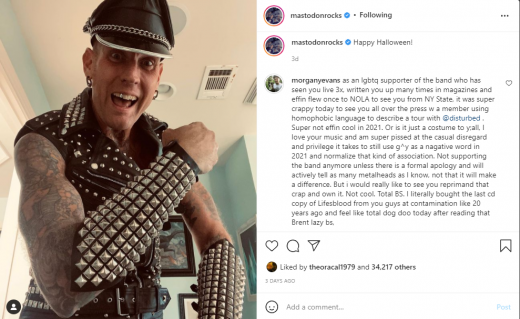 MASTODON have long been one of my favorite bands. I have seen them a number of times and even flew halfway across the country once to catch them play with my friend’s in KYLESA opening. It made me furious and sad today to see Brent today in multiple metal media outlets (with NONE calling him out) quoted using ‘gay’ as a negative word for touring with DISTURBED.

Whatever anyone’s opinion of Disturbed is besides the point. We are NOT gonna be in 2021 and have grown ass men in public normalizing gay as some weak or bad thing. I expected better from them, I really did. And especially it is tacky af since another member just dressed as Halford from Priest for Halloween! That would be rad if another member wasn’t using ‘gay’ as a pejorative.

“mEtAl DoESn’T CaRE AbOUt FeElings”. Cool, then FUCK YOU. I am super sick of this shit as a pansexual human being, let alone metal participant. No one will say shit cuz it is with a band with Pike and everyone will shrug it off. Fuck that, you are supposed to be leaders in the scene. Man the fuck up.

Unless they issue a formal apology I can’t support them anymore…look, I believe in growth and forgiveness and we all have needed it before in life at some point. This shit is just not cool, though. At all. The amount of lack of concern for other’s safety and privilege it takes to shrug that away is revolting. I hope Disturbed honestly say something about it as well.

UPDATE- Brann just hit me up and we spoke at length and he was very apologetic that Brent had used the word that way and didn’t want LGBTQ fans to feel unsafe. He said to me he is going to respond to my comment on their insta and address it to make queer fans feel safer. He definitely listened to me and was very respectful about it, which I appreciated. He also was respectful when I told him I was leaving this article up to advocate for not normalizing it on behalf of the queer metal community. Thank you, Brann. That means a lot. Though it looks like my original comment on their Insta might have been deleted? So I am curious how they will respond.

I will say I told Brann I know no one wants this to happen when a new album drops but it is right to apologize to lgbtq fans and not be like All That Remains and double down on f–got or gay being cool as a pejorative. Apologizing would make us gay and bi and etc folx feel seen and so I hope the band and label don’t try to just pretend it didn’t happen.

Sharing only one screenshot below, because I trust Brann but I don’t trust major label gaslighting damage control. The rest of our convo will remain private but he was very receptive and consoling and cool, which I appreciated. Again, I am not trying to cancel the band, rather to make sure this shit stops happening in metal and there is demonstrable growth. 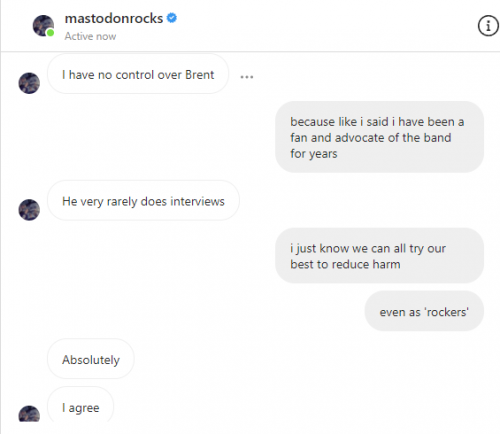 UPDATE TWO- I guess my comment wasn’t deleted on their Insta but I couldn’t find it for a minute, but Brann responded to it officially. It at least shows the other dudes in band don’t want to think they are green lighting their non lgbtq fans to normalize “GAY” as an insult. That makes a teachable moment. I certainly feel more seen as a result: 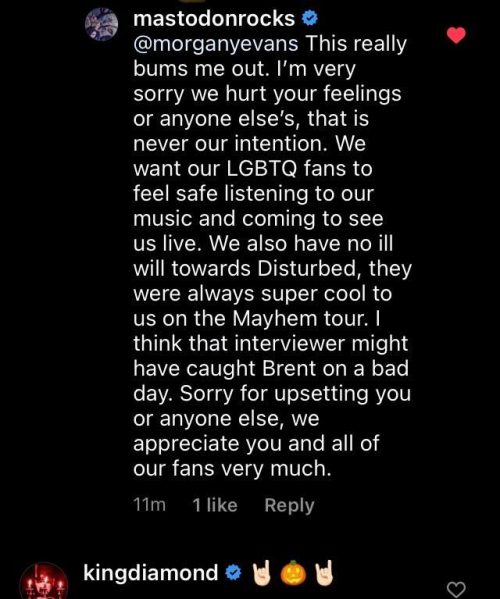