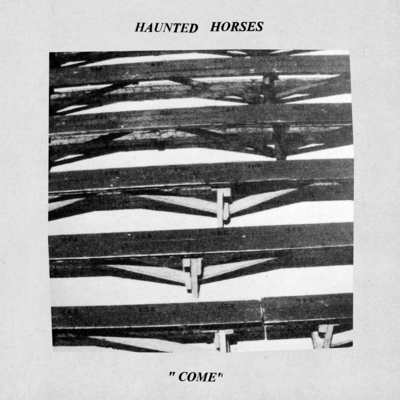 The tastefully bleak and bold Cercle Social Records camp has launched the Pre-Order for pushy post-punk’s Haunted Horses new 5 song EP HERE! The Seattle group have a very compelling sound that is both spare and huge, the live drums bashing through the discordant yet melodic guitar layers and sort of morose but personally affecting vocals for a sound that reaches out and grabs you tightly. Really hope people get into this industrialized punk EP.

Seattle’s The Stranger describes the band as “confrontational prog punk as imagined by a troupe of angry cave-dwelling Luddites, Haunted Horses manifest a furious onslaught of sound rarely found these days, at times channeling prime-era Liars in their cacophonies of claustrophobic angst.”

New music is not available to preview yet but you can get crushed and crush on the older vibes of HH’s  “The Void” music video HERE. It’s pretty close to some of the energy of the new stuff I have been lucky to get a preview taste of only the newer stuff I heard was more driving without sacrificing cool experimental aspects.

Get yr shit together and get on over and order a copy! The EP drops July 20th, so you won’t even have long to wait!