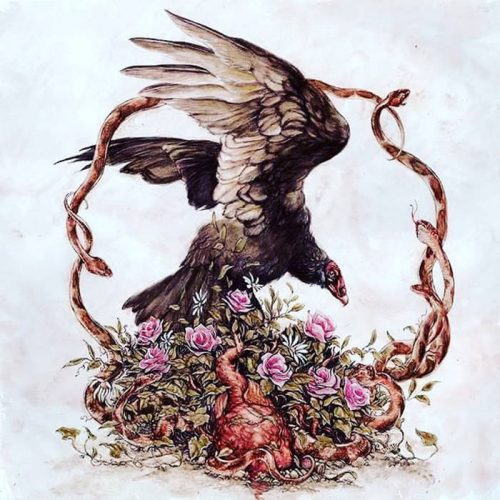 Nate Hall is one of my favorite artists and a very smart, interesting person. I always tell people he should be considered a national treasure (and I know I sound like a super fanboy) for his work, but it is true. The North Carolina sound architect is at the frontier’s edge for post-rock, psych metal and inspired, lonely folk music that cuts to the bone but also helps you find refuge when you are on the mend. Be it in USX, Uktena  or his prolific solo output (the guy just released the excellent A Year Under A False Moon earlier this year and already has another one on the way), Nate Hall is one of those people who it would be actually worth it to spend $ on for one of those full Bandcamp discographies. He can really take you to and through many different places.

Now Nate Hall has announced he is releasing The Center Of The Earth on August 31st, an album he says is one of his most important pieces of work.  “I’ve never sacrificed so much for my art,” Hall tells me. “I’ve never felt such clarity from confusion. These are songs that have always been.”

The sole single available so far as a prelude to the days away full album release is an impressive brooder called “Night Sky Humming” that opens with a tone setting pretty powerful cowboy’s lament-esque lyric: These are the words I use to tell me what I’m dyin’ from /My directions for living were all wrong…

It is a reminder that not everything needs to be Slayer to visit some pained and troubled corners and that many weary roads and labors can bear potent fruit.

Hear the track and pre-order the full album HERE.