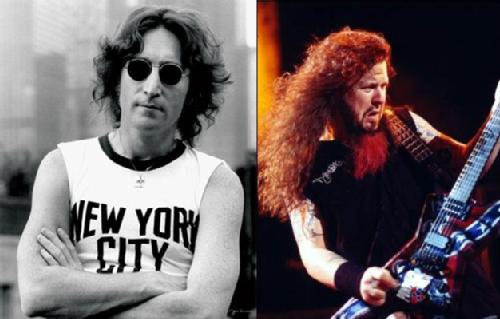 “I hope someday you’ll join us and the world will live as one” has somehow become maybe the most metal thing you can sing these days. The horrible amount of shootings of black men shows a real problem. Cops are people too and subject to fears, nerves and biases as well as the next, but carrying a gun means you have to be extra on point when it comes to firing it and the social implications. Anonymous hacking the KKK’s twitter exposed some horrible truths as well. When will people evolve?

This December marks too long since we were graced with the living, breathing presences of Diamond D. and John Lennon, but their music is as alive as ever. Pantera and The Beatles, hand in hand in my book. That’s just how my brain works. The best artists inhabit a shared space, like the virtuous pagans in The Divine Comedy, though if we weren’t busy “imagining there’s no heaven” I’d protest anyone who tried to keep Dime or Lennon from entering the Pearly Gates to rock with Jimi and my old drummer Pat Howland for an eternity of awesome times. Layne from Alice In Chains. You get the drill.

Can’t we all just get along?

Debbie Harry is playing the annual John Lennon tribute tonight and I will also be listening to Pantera today. Let’s make a change out there, people.

Kerrang! has the best Dime memorial up so far this year, so I’m gonna direct you all there. I have a hard time writing about it sometimes. I hope Vinnie Paul and Phil Anselmo can make up some day.