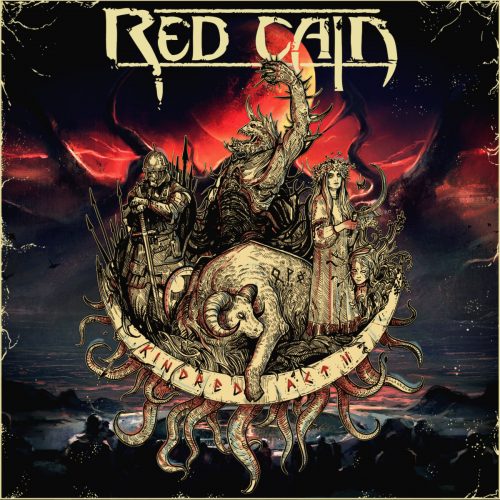 Calgary, Canada’s progressive prog Red Cain have launched the pre-order for their new album Kindred: Act IIset for digital release on January 22, 2021. The CD physical release will be done by Sliptrick Records at a later date in the new year. The upcoming full length continues and ends the band’s storytelling of their Kindred saga.

“Here we go, friends – the pre-order for our next LP “Kindred: Act II” is LIVE! Thank you for your belief in our work. Ride on with us on the second half of the “Kindred” saga – this mad march toward the Sun. Experimental, aggressive, and recognizably Red Cain in its style, “Kindred: ACT II” picks up and expands on the events from our previous album, centralizing the story around the Aztec warrior Zalcoatl, ritually chosen to save his people, and trapped inside an alien pyramid to battle a hungry, unearthly Lovecraftian entity that plans to use him to be released into the world beyond its archaic prison.”

“Demons” is a driving and insistent banger that could appeal to fans of everything from symphonic metal to The 69 Eyes to perhaps even Rammstein. It has been out for a few months and bodes well for the full release! A very cool sound with a lot of groove as well and a playful side that nonetheless remembers to be rooted in respect for heavy metal. The song is a lustful and dramatic celebration. “Let the sun light you up like a cigarette”, indeed.

Along with the pre-order of Kindred: Act II”, Red Cain is giving fans seven custom pieces of digital art designed by the band along with an immediate download of their goth-rock headbanger”Demons”.