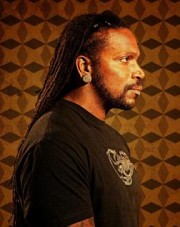 Vocals is the focus of this update as we hear from Sepultura‘s Derrick Green. He talks about different techniques introduced by producer Roy Z,  who has worked with the likes of Judas Priest, Halford, and Helloween. Also, Green excitedly admits he is eager to get fan feedback on the latest album, “Kairos,” marking it at number 13 for the band. The album is expected late spring/early summer on Nuclear Blast, which the band signed with last year.