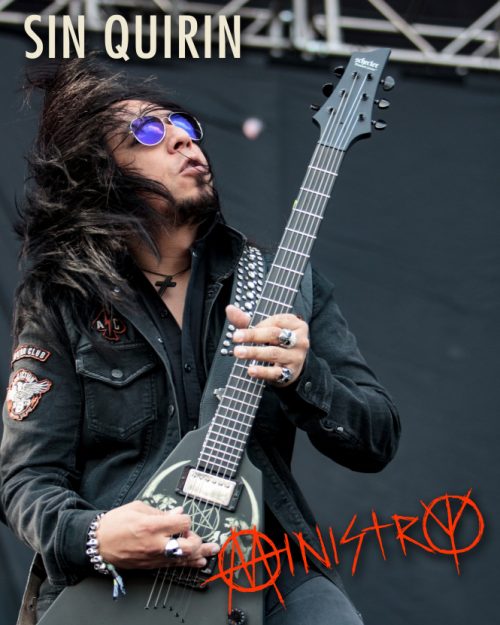 Writing this post is triggering as hell and my hands have been shaking.

The great writer Maggie Serota at Billboard has published a must read piece regarding child rape allegations against Sin Quirin of one of my all time favorite bands Ministry. The headline of the article falsely says Underage Sexual Relationships but there is no such thing because you aren’t in a “relationship” if someone is not able to legally consent , not to mention there is a wild power dynamic imbalance. Two alleged victims have spoken out and there appears to be a lot of corroborating email evidence and more – including statements from a former partner of the Ministry guitarist, Lacey Sculls.

1.) I have been talking about this for years now, and finally it has been confirmed by media giants BILLBOARD and SPIN. #SinQuirin, guitarist for the bands #Ministry and formerly #LordsofAcid, has multiple accusations that he is a sexual predator of underage girls.

I have several thoughts. Ministry needs to kick or at minimum sit Sin down out of the band line-up immediately while this is looked into. I have interviewed Al 2x and Sin once and know former member of the band and they were a huge part of my social consciousness developing. So what. Despite talking to Al being a highlight of my professional career, Sin needs to sit down and not be on the tour with KMFDM while this gets “sorted out”.

Al issued a rather anemic statement through legal channels: In a statement, the band’s lawyer said, Ministry frontman Al Jourgensen “is unaware of any of potential nefarious activity by any member of Ministry during their respective tenure(s) with the band including but not limited to Mr. Sin Quirin.”

Well, hire someone else for the upcoming tour anyway. Even if you are “unaware” of it, there needs to be accountability in these matters and erring on side of caution to show survivors in your fandom and the wider world that this is something the band doesn’t take lightly. Especially since Al has condemned R. Kelly rightfully in the past.

This is a situation where the band can find someone else easy who would jump at the chance to play Sin’s parts. Dino Cazares or anyone who can play fast industrial would be great. Quirin’s attorney also calling one of the allegations “hilariously false” is a huge no no. It is not a hilarious situation in any way. This is the kind of tone deaf insensitive to victims BS response that- even if for example Maynard from Tool was innocent of edging the age of consent and having security poach girls off boyfriends at shows- soured me from supporting Tool at all again after Maynard rebuked the recent allegations against him with snarky tweets that could be very discouraging to people on fence about coming forward.

If someone is innocent I am not saying they should never play again but otherwise they need to be accountable and then it is up to the victims comfort what happens.

“The thing about being young is you have a harder time saying no,” recalls one of the alleged Sin victims. “…I really don’t want to let this person down, but I also don’t want this person to hurt me.”

I have a lot of sexual trauma and can relate to that statement. When I was 15 I was statutory raped by someone twice my age when I was incapacitated on three bags of heroin after a NIN/Manson show and my first time ever in Harlem in an unfamiliar neighborhood. It is one of my core traumas from early life and I never spoke about it for years because the person’s father is the first black person ever to win the Pulitzer Prize in a huge category and was a symbol of unity. I didn’t want to tarnish their family legacy and thought I would be mocked. It was very emasculating to me as a very closeted non-binary person, on top of everything else. I felt “not a man”.

I am lucky to have had a measure of restorative justice with this person and another friend who did something to me (there are several more including a literal doctor who I never will). That is not always healthy or possible. But the mental burdens certainly persisted for years of compartmentalization and therapists have agreed it is one of my foundational traumas from youth. I have spent years navigating very difficult times of mania, hyper apology, self-destructive cycles and racing thoughts, insomnia and other things that sadly still rear their head at time. Thankfully with the new decade I am meditating and sober again from booze, so far so good (and no narcotics at all since 1999). Sometimes due to this and other things like varying dysphoria or mental baggage I have had to be celibate for years at a time.

We can’t just pretend these scars and hurdles are all fake or people aren’t left holding the bag for other people’s “it was a wild, rock n roll time”. I have to think of that every time I love, say, David Bowie or Zeppelin. Humanity has to try and be accountable when there has been harm. Or at the very LEAST try and be healing and calm in the surrounding discourse so as not to encourage the type of “His Side Too” online bullying that Backstreet Boys fans dumped on  the wonderful Melissa Schuman.

Sure, the conversation has evolved a lot since the 70’s and 80’s when more rock “gods” than not were doing super sketch shit… but even if someone like Sin WAS innocent – if we don’t even have civil discourse around these matters and sound arrogant like Sin’s lawyer or Maynard (who I believe said he shouldn’t have to bother responding to allegations or something similar), how the hell are people ever going to heal or feel safe. How can we trust the intentions of a band with social lyrics like Ministry? OR should we focus instead on the part in your book where you mock Madonna smelling like‘ tuna and dog shit’, Al?