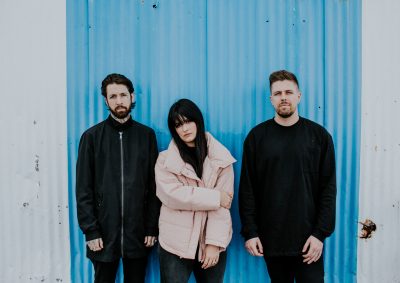 Metal trio, Spiritbox have released a music video for their new single titled, “Electric Cross“. The new single follows up on the group’s recent single, “Perennial”, which dropped last month.

Vocalist, Courtney LaPlante gave her thoughts on the new single, “This song makes me so uncomfortable because it’s about everything I do not want to acknowledge. Feeling like I have no autonomy over my own body. How much anger I have towards those who have wronged me, and the environment that allows bad things to happen. Knowing that something that feels so isolating is such a universal feeling.”

Having toured the world as members of the eccentric metal band iwrestledabearonce, vocalist Courtney LaPlante and guitarist Michael Stringer wanted to take their intensely personal and technical musical focus in a new creative and personal direction. Spiritbox was the result.

In 2017, the husband and wife duo sent their unreleased debut Self-Titled EP to Bill Crook of the Vancouver pop-punk band Living with Lions hoping only for constructive criticism. Instead, they found themselves with a new bandmate and best friend. Together, this Canadian trio has set out to bring a new and refreshing perspective to metal.