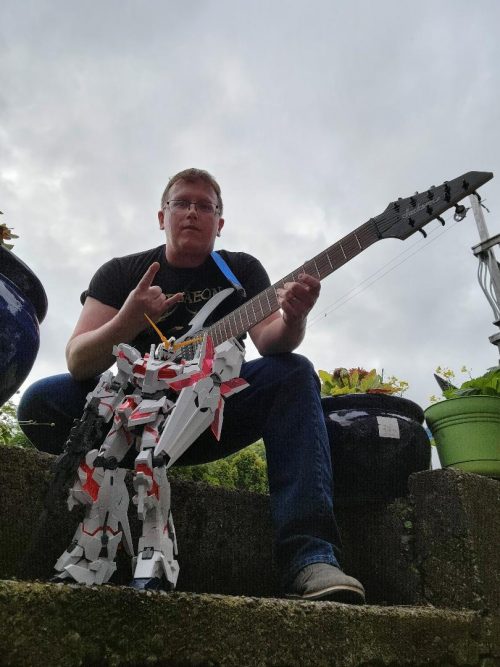 Canadian progressive technical death metal act Stormland has emerged from the COVID years with a new album, The Human Cost, set for release on September 30th, 2022.

The band made the announcement via a video released to social media and YouTube. This video includes parts of the songs “Marida,” “Test Subject,” “Rebuilt For Your Whims,” and “Esper.”

The Human Cost was written and recorded over the course of two years by Stormland’s Justin Pierrot and is the first of his albums to feature extended range guitar and bass.

The eight tracks continue the trend started on the prior Stormland offerings Songs of Future Wars and Incident Report: UC-0791227. The new album applies the lore of the Mobile Suit Gundam meta-series to inform its eight songs concerning the wide-ranging effects of war on a potential future.

The album also features guest appearances from Leda Paige (The Hallowed Catharsis, Jisei, SissyXO) on lead single “Test Subject” and Ross Sewage (Exhumed, Impaled, Ludicra) on “Rebuilt For Your Whims.” The album mixed and mastered by Patrick Bruss of The Filth Chamber in Denver, Colorado.

This eight song album maintains the Gundam thematic lens, while bringing new tools, including eight string guitars and six string bass, to add new colors to the increasingly technical and progressive sound. Thus, with The Human Cost, Stormland fully makes the leap into the realm of progressive technical death metal. “This entire album is a massive leap forward for me,” said Pierrot “The 8-string guitar really helped me open up my songwriting due to the extra range. It forced me to really push myself so that I didn’t just rely on the low low E string but used every inch of the fretboard in an effort to create death metal that will make people feel something.”

Schuler Benson (@deathmetalradio on social media), the host of Gimme Radio’s “Malpractice” and co-host of the YouTube series “Symposium of Sickness,” stated, “The Human Cost is equal parts oath and monument, shedding blood in the service of Gundam lore while passionately navigating death metal subgenres with style-shifting fluidity. Come to see the damage the machine can do, stay to connect with the human face underneath.”

Conceived in 2003 by vocalist/guitarist/programmer Justin Pierrot, Stormland has been active at varying levels ever since. Primarily a studio project, this Canadian death metal act has seen its lyrical focus evolve from vague sociopolitical vitriol (Complaints and Grievances demo, 2009) to analyzing the more mundane and fantastical (True, North, Strong, and Cranky EP, 2015) before eventually coming to rest on the Gundam theme (Songs of Future Wars, 2018 and Incident Report: UC-0791227, 2019).