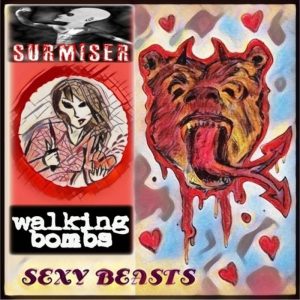 The Surmiser track finds the space grunge band re-interpreting the first song they ever wrote “What End?” into a slightly more driving and post-punk attack that still has a sort of heavy distortion that will please fans of Melvins’ epic cover of The Wiper’s “Youth Of America” while perhaps also appealing to the Publicist UK crowd with droll yet potent vocals.

Walking Bombs jumps genres with practically every song (their last song was an extreme grindcore tune), but this new one is a very psych pop influenced non-metal song called “Queen E”. It barely passes two minutes but has many textures in that time until the ‘peak’ at the ending. This one is more for the kind of grunge fan who also leaned towards The Breeders and Kurt’s Beatles influence rather than the more Nevermind-fitting Surmiser track. Check them out!