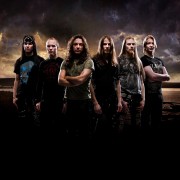 Finnish powerhouse Thaurorod, who recently successfully finished the Power of Metal Tour w/ Symphony X, Nevermore, Psychotic Waltz, and Mercenary have announced a new band member, keyboardist Vili Ollila. Vili has worked as a professional keyboardist – live, studio and teaching – and played alongside Finland’s finest pop/rock/metal musicians: most recently with Raskasta Joulua (“Heavy Christmas”) and Northern Kings projects, each featuring some of the most prestigious frontmen in Finnish metal.

Vili comments joining Thaurorod as follows: “When I was asked to join the band very late in 2010, I had already other obligations signed & sealed for the early spring of 2011. After attending a few rehearsals with the guys, listening to some new kick-ass T-Rod tracks and sharing a stage with them prior to Power Of Metal tour really convinced me that I definitely want to be a part of a group this motivated and talented! Sadly, I couldn’t attend the POM tour and that nearly broke my heart – still I’m glad that the guys understood my situation and I’d also like to extend my thanks to talented Mika Karjalainen who helped T-Rod out in their hour of need. I’m really looking forward to our next shows, especially at Metalfest and Metalcamp, and I’m also pretty stoked about the pre-production and finishing the songwriting process for the next T-Rod album. Full speed ahead! Hope to see you on tour anytime soon. Yours, -Vili”

For what the band has to say about their newest member, go here.

The band’s statement about Vili joining the fold: “Vili is the perfect choise for the keyboards in Thaurorod and we could not wish for any better, nicer and motivated guy to join the band! We have already many pre-recorded tracks for the 2nd album done and also Vili have taken part into composing and writing lyrics for the 2nd album of Thaurorod. Vili is also phenomenal on stage and one of the best keyboardists we’ve ever seen. We already played one show before the Power of Metal tour with Vili and everything just cliced perfectly. For Power of Metal tour Vili was unable to take part as he had already some other duties for February-March 2011 so we took a replacement keyboardist Mika Karjalainen for the tour. At this point Thaurorod wants to thank Mika for the priceless help for doing this tour with us and being so great on stage and off stage. We owe you big time dude! Unfortunately we can only pick one guy for our new keyboardist and the decision is Vili. So hope the fans will give a warm welcome to a new T-ROD member!!!”

After releasing their debut album “Upon Haunted Battlefields” in September 2010 via NoiseArt Records, the band is currently in writing mode and a new album is expected to be released early 2012.