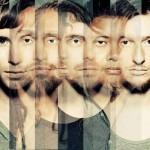 LA prog metal geniuses The Human Abstract have signed with E1 to release their third studio album, “Digital Veil” which will be available March 8th. This album marks the departure of former singer Nathan Ells, who was replaced by Travis Richter, formerly of The Color of Violence and From First to Last. Also, founding guitarist A.J. Minette returns to the band as well.

The band has released one song for download called “Faust,” as well a video sampler of current works from the studio.  Click here to watch the video.
[youtube]http://www.youtube.com/watch?v=2YyjfywUWgU[/youtube]

More News On The Human Abstract: