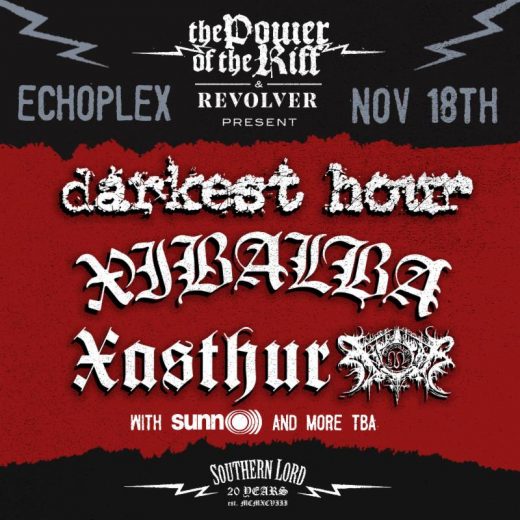 November will see the 20th anniversary of Southern Lord celebrated in style. The first version of THE POWER OF THE RIFF festival since 2016 sees numerous bands pooling their radness to crush all naysayers.

THE POWER OF THE RIFF’s 2018 festivities will begin on Saturday, November 17th, with a kickoff party at The Echo. This show will see new Southern Lord act THE PRIMALS, a power trio featuring members of Darkest Hour, The Explosion, and more, opening for a rare set by legendary ’60s garage rock outfit, THE SONICS.

The main event for THE POWER OF THE RIFF will take place the following day, Sunday, November 18th, at LA’s The Echoplex. This show will be headlined by SUNN O))), who in 2018 is celebrating the act’s twentieth anniversary along with the Southern Lord label which was also created by the band in 1998. This show mark’s SUNN O)))’s only California show of 2018 and final show of the year. Additional acts have also just been announced, including long-running metal quintet DARKEST HOUR, brutal metallic hardcore outfit XIBALBA, and legendary underground entity XASTHUR.

Watch for additional acts for the main event to be announced in the days ahead as THE POWER OF THE RIFF 2018 continues to take form.

Check out the new THE POWER OF THE RIFF website RIGHT HERE and find tickets for the event at THIS LOCATION. A limited number of special VIP tickets are available, each of which includes early entry, a drink token, Southern Lord swag bag, a SUNN O))) surprise, and more.