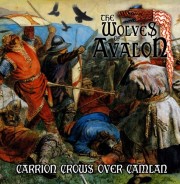 According to a press release,The Wolves of Avalon’s “music can be termed Celtic pagan metal that simmers in a doleful, almost tragic atmosphere with sporadic up tempo sections to shed light on the Dark Age tale that writhes within. The concept is of the British Celtic Arthurian age much maligned by exaggerated myths and erroneous histories of Britain. The album reflects a period around 500 A.D., that existed after the Romans were recalled to defend their homeland from the Barbarian migrations, the same land hungry hordes that were to engulf the warriors and tribes of Britain. This was the era of the Germanic and British wars, and the Arthurian defence of our sacred soil that was to end in defeat at Camlan. The main essence of the lyrical concept is the great victory over the Germanic invaders, at The Battle of Baddon Hill around 500 A.D., [also known as Mons Badonicus] Baddon Hill was the great Victory that this album surmounts. This was when the British Celts defeated the Germanic Saxons in the last great Celtic age of heroes. It is ironic to think the Saxons and their fellow invaders, the Angles and Jutes would soon after amalgamate into what would be termed as the England. [Angle land]. This album celebrates the old British pride, the old Gods and the great tribes prior to the alien Germanic incursions. This is an album dedicated to our Pagan ancestors.”

“Carrion Crows Over Camlan” track listing:
01. Intro – This Mighty Isle
02. The Wolves Of Avalon
03. Enchanted Spirits Of Warriors Slain [instrumental]
04. Lost Gods We Call On You
05. British Tribes Unite
06. The War Song Of Beli Mawr
07. The Siege Of Badon Hill
08. The Last Druid
09. Carrion Crows Over Camlan
10. Britain Is Fallen
11. Ravens Over Dumonia [instrumental]
12. Song Of The Graves

More On: Black Metal, Release, The Wolves Of Avalon, Godreah Records
share on: