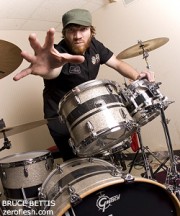 Unearth have announced that drummer Derek Kerswill is leaving the band.  The band has released the following statement:

After three plus years of touring the world together and playing on our latest album “The March”, we have parted ways with drummer Derek Kerswill.  The most notable reason for the split are the creative differences.  The time has come for Unearth to write a new album and creating music with a tight unit is the only way we can assure the best collection of songs possible.  The differences between Kerswill and the band started off as subtle, but became increasingly obvious over the past few months and it was time for both parties to go their separate ways.

We have shared a ton of great experiences and achieved many of the goals we set for ourselves in the time he was in the band.  There is no ill will from either side of this decision and we wish him only the best moving forward.

“Creative differences are real and unfortunately have gotten the best of me. I wish the guys luck in the future and thank you to everyone who ever loved + supported “The March”,” Kerswill said.

Unearth won’t skip a beat, though, as we will be announcing a replacement drummer for our upcoming European stint on the Persistence Tour shortly.  Lastly some exciting plans are coming together for the recording to the follow up to “The March” sometime early in 2011.