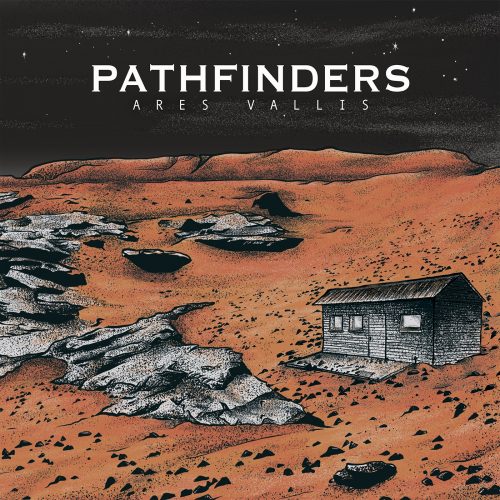 France’s Pathfinders are ready to make first contact with the landing of their debut album Ares Vallis via label Music-Records on April 16, 2021.

Just like the NASA space probe “Mars Pathfinder” that their name is originated from, Pathfinders are embarking on an encounter of the metal kind. Entering the Ares Vallis, the band is rooted in a primary sound of groove metal, but introduces fans into an astronomical discovery of twelve tracks assembled with progressive, thrashy, djenty, and melodic tones.

“We are fascinated with space exploration, especially following recent odysseys to the red planet. We believe it may be the next step in humanity’s evolution of uncovering what this universe holds. This is an album of us telling stories on adventures to and from Mars.”

The band’s lead single “Damned Earth” was released earlier this year, and it immediately crushes everything in its path, leading an assault with speed and breakdowns, along with a tinge of hardcore tendencies mixed with accelerating quantum force.

Fans of bands such as Lamb of God, Periphery, Parkway Drive, and In Flames will be intrigued to enter the undiscovered metal terrain that Pathfinders are offering up.

Pathfinders was formed in 2018 and consist of the Gaucher brothers Jérémy (Bass) and Romain (Guitar) with Jérémy Barthélémy (Drums), Benjamin Daguet (Guitar), and Clément Levy (Vocals).

“Damned Earth” can be heard on the following links:
YouTube: https://youtu.be/ujmLEJ4tFu0
Spotify: https://spoti.fi/2OP2Ivv

“Ares Vallis” will be available on all digital platforms via Music-Records on April 16, 2021.
CD pre-order here.

Fun Fact: The album title “Ares Vallis” is named after an outflow channel on Mars, which appears to have been carved by fluids, perhaps water.