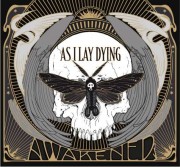 California metalcore band As I Lay Dying have released the first in a series of  in studio videos from the recording of their forthcoming album Awakened.  This will be the band’s sixth studio release and is due to come out September 25, 2012 under Metal Blade.

As I Lay Dying have also finished a performance music video for the song “A Greater Foundation” to be released in the near future.  It was directed by Drew Russ, and bass player Josh Gilbert recently had the following to say about working with him:

“We were all impressed with Drew’s ability to capture the intensity of live band performances in his videos, and ‘A Greater Foundation’ is no exception.  Drew’s technique, along with the all-day participation of some of our diehard fans in Los Angeles, definitely accentuated the energy of the song and makes for an exciting and dynamic video. We can’t wait to unveil it!”[youtube]http://www.youtube.com/watch?v=pt4KrHJDaVo[/youtube]