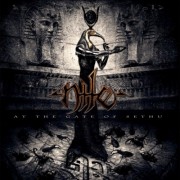 South Carolina technical death metal band Nile have released a video for the song  “Enduring the Eternal Molestation of Flame” off of their 2012 release At the Gate of Sethu. At the Gates of Sethu is Nile’s seventh studio album and a follow up to the bands 2009  Those Whom the Gods Detest. The album was released in July via Nuclear Blast.

The album’s producer and director Jon Simvonis commented:“It was truly an honor to direct the new Nile video; a band with so many diehard fans and such a strong impact in the metal scene, The video concept, as a matter of fact, was inspired by the culture and the ritual habits of the Ancient Nubia, a region along the Nile River, which is located in northern Sudan and Southern Egypt. The research and design elements of the video led to a really interesting combination of the Ancient Egyptian myths, through the prism of the Nubian African Voodoo Burial rituals. Two worlds set so close, yet so far from each other.”