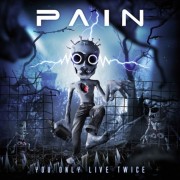 Peter Tägtgren, frontman of wedish industrial metal icons Pain has posted the second portion of his track by track commentary for the band’s upcoming album, “You Only Live Twice.”  You can give it a looksee here (part 1 here).

The new album will be released on June 3rd in Europe and on June 21st in North America, via Nuclear Blast.