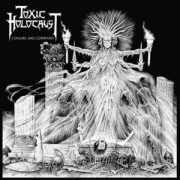 Toxic Holocaust just released Conjure and Command last month, but just recently were they released some in-studio footage showing exactly that that album was made. Largely considered a “comeback meets throwback” record, their newest output from Relapse features intense vocal range and superior songwriting to their prior three albums.

The Oregonian metal trio just kicked off a US tour with Krum Bums and Holy Grail and the album is available for full stream and purchase on this site.