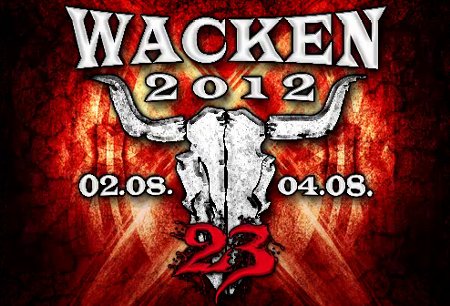 As you know Metal Riot was lucky enough to have a crack team of reporters on the ground in Wacken, Germany for the world’s largest metal festival from August 2nd to the 5th and we have put together some exclusive reviews and photos. For an over view of the event as well as pictures and reviews of Sepultura, Darkest Hour, The Black Dahlia Murder, Opeth and Insomnium click here.

The best way to describe Wacken, is Disney World for metalheads. Replace the ears with a cow skull, the rides with stages, the characters with beautiful women and the kids with metal heads…endless metal heads, and the Euro is surprisingly similar to Disney Dollars. Another similarity to Disney World is the bullshit we had to endure to get there, we drove for 4, hours took a 7 hour flight, then a 2 hour flight, the airline lost our luggage, the car company saved us the wrong car and wanted 1,000 extra Euro, we got lost on our drive from Hamburg, and the second we got to the village we saw the familiar sea of metalheads and I didnt stop smiling for 4 days. I have been to some large festivals I would say the largest being around 20,000 but nothing I have seen compares. The show is basically the size of the town I live in. It’s unreal and its instantly apparent. 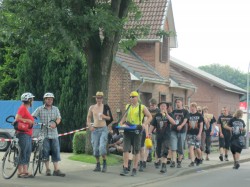 This was my second time at Wacken and honestly its a bit of a culture shock. There are cops everywhere and then tens of thousands of metal heads getting faced and listening to music at make shift bars that the locals make our of their garages  and porches. It takes a good solid 30 minutes before you realize that you can shotgun beers while running alongside a car singing the lyrics to Judas Priest but then you see someone doing this and realize that you are pretty much home. We parked our car at the campground and made off to get our press passes…. now to the music. 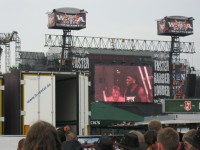 After we got situated we headed over to the beer garden to see Sepultura. Now I must confess that I am a Sepultura purist but the set was amazing. Sepultura had hired the French industrial percussion band Les Tambours du Bronx, again, and they accompanied them through a great deal of their songs. They played a few classics that sounded amazing with the additional drums although the majority of the set was Kairos, including “Firestarter.” They ended with “Roots Bloody Roots” which with the Les Tambours du Bronx was the highlight for me. You can watch the whole concert here. 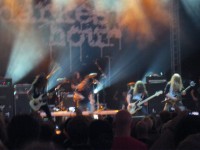 Forward to Saturday, which we spent most of the morning doing interviews so we missed a few of the earlier bands, but we did end up heading over to see Darkest Hour. I have been listening to Darkest Hour for years and with such a catalog of stuff to pick from I wasn’t too sure what their setlist would consist of but I can honestly say that it was one of the best performances we saw. They played a good deal of new stuff but also tore it up with some classics. You can read more about it in our interview with John Henry. 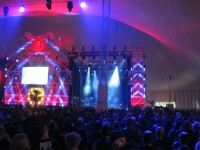 Now every fairy tale has a villain and Wacken is no exception. The villain…sound quality, although only on this set. The next band we went to see was Black Dahlia Murder. I love this band. I have loved this band since Unhallowed and even gave them a pass for Miasma which makes this even harder. There was nothing wrong with the setlist, although they didn’t play “Funeral Thirst,” it consisted of mostly songs off Ritual with the very welcome addition of “What a Horrilble Night to Have a Curse” but the sound was fucked. The drums were too loud and the guitar was practically non-existent. Quite frankly it sucked. 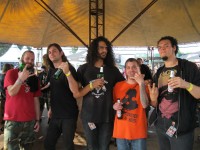 Up next was to interview Warbringer. I am not going to go into any more detail on how amazing these guys were here but you can read the whole interview here. 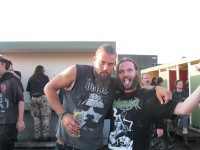 We parted ways with Warbringer to go take in the Opeth set and while I don’t think I have ever played and Opeth CD, these guys are amazing and if you get a chance to see them I would highly recommend it. Another great thing about Wacken is that you are never more than a few steps from a new friend and I met a very large gentleman in the pit before Opeth who looked like Khal Drogo. The Khal had me up on his shoulders for a good chunk of what was an incredible set. The Khal and I agreed that we liked Akerfeldt better in Bloodbath but the set was great. They played mostly Heritage songs and ended up with a personal favorite “Deliverance.” 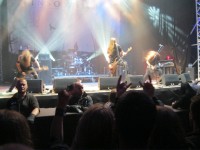 Now my friends, it would appear that I have saved the best for last. The best performance that I saw through the festival was Insomnium. I have to tell you that besides hearing a few songs from this band in the past I was almost completely unfamiliar, but a friend we went with insisted we go and see them and they destroyed it. If you are not familiar with this band I highly suggest you become so. I wish that I could tell you more about the songs they played but I was a total novice but I assure you I will not be for long. 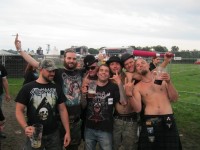 To close, it rained all fucking weekend, our tent colapsed twice and soaked all of our stuff, I slept maybe 4 hours the whole time, was always hungover and it was the most fun I have had in my life.  Half of the people in the airport looked at us like we were crazy for heading halfway around the world to see a metal festival and the other half had traveled halfway across the world to see the same festival. If you think its crazy or stupid to spend a ton of money to go to a show then its not for you, but if you pretty much eat, sleep, drink and breath metal get your ticket before they sell out, like they do every year, and tear it up.

I wanted to give a shout out to everybody at Metal Riot, and extra shout out to Nich because without him Warbringer and Darkest Hour would not have happened, to our camera man Dan the Marine, to Traci for being cool with me traveling half way across the world to do what I love and finally to every kid who shared a beer, food and or their tent with us on rainy nights. WACKEN!

To check out part two of our coverage click right here.