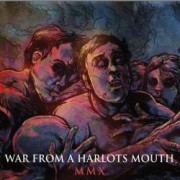 Berlin deathcore act War From a Harlots Mouth have made their entire soon to be released album “MMX” available for streaming on the band’s Myspace page.  The album is set for release through Lifeforce Records in Europe on October, 29 and in the USA on November 9.  European fans can pre-order the album here.  European CD pre-orders through imperial clothing contain the limited edition digipak CD with exclusive extended artwork.  It includes a DVD, featuring the band’s history and interviews.  US fans can pre-order the album through Amazon here.

More On: Metalcore, Music, War from a Harlots Mouth, Lifeforce Records
share on: