Well, this latest development is absurd 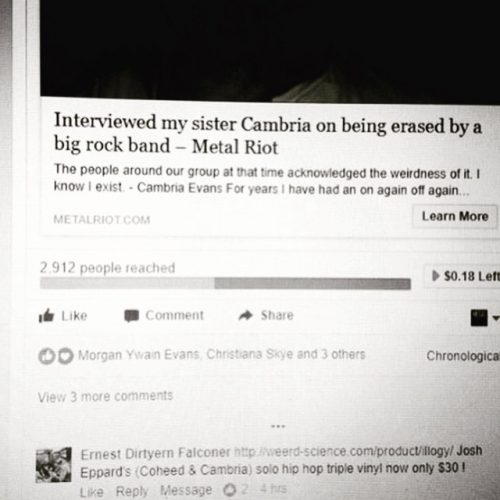 Remember the other day when my sis Cambria finally felt comfortable talking about being erased by Coheed? And then the good folks at Metal Sucks boosted it? The band never responded (of course), but I did start to have a productive and semi-healing conversation with Josh Eppard’s uncle John The Baker – a dude I genuinely like.

Anyway, the band’s proxy former troll leader who used to ramp up fans and PM my supporters to try and convince them I am crazy (that’s not slander, they have the evidence and one is a staff writer at Metal Injection even, hahaha)…this dude Dirty Ern who also performs with Josh in his rap group Weerd Science decided the least completely dismissive response was to try to SELL WEERD SCIENCE albums in the comments section of the FB thread on the Metal Riot post I was boosting about Cambria’s heartfelt interview/conversation with me.

Look, I don’t want to fight them but this completely helps prove my point of how it very much seems like they value profits over people and burying things or trying to save face over real reconciliation. It’s complete bullshit and not punk at all. GTFO w that shit. Do you know how expensive it is and daunting to get trans medicine and surgeries? VERY. Or to be open about depression? And this dude is straight ridiculing everything we said in the interview by asking people to buy their records on the same thread? When the band hasn’t even bothered to respond?

Also not smart when I know how long they kept Mic Todd in the band past when it was healthy for the sake of financial stability to their brand before finally letting him go at his absolute worst and then putting all the blame on him.

I have said many times as a manic depression suffering trans person with bigger issues how I would really like positive closure with them and this is the kind of bullshit they have done for years. Then I get blamed as “crazy” for complaining about it. Eff that shit. I just want them to admit all the things they lied about over the years and to have a constructive healing with me and mutually apologize. Doesn’t that seem like a better lesson for everyone than hero worshiping a dude who would rather throw shade at real people in cartoon songs about murdering girls?

I’ve tried to make peace many times but they won’t hold up their end in full and so hope I just shut up and go away or try to dismiss me. Over that shit.