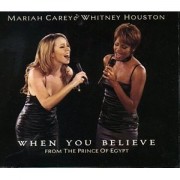 Yes. You read the title correctly. We managed to actually uncover a heavy metal cover of a Whitney Houston song. It may not be what the miscreants over at Dying Scene managed to dig up but we’ve got Mariah Carey at the same time! BOOM!

“When You Believe” is a Whitney and Mariah duet from 1998’s animated movie Prince of Egypt and some guy named Jon P managed to do a sweet metal style instrumental cover of it. Check out the Whitney and Mariah original and Jon P’s cover right here.