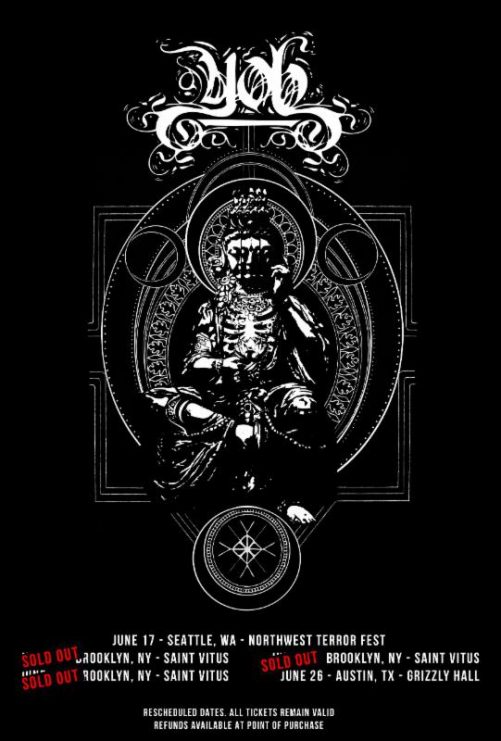 Cosmic doom trio YOB will make their return to the stage this week at the Northwest Terror Fest in Seattle, Washington alongside Coven, Cephalic Carnage, Wolves In The Throne Room, and so many others. The performance serves as guitarist/vocalist Mike Scheidt’s first show since undergoing emergency diverticulitis surgery earlier this year. Diverticulitis is an inflammation of the digestive tract and is often life-threatening.
Said Scheidt in a recent Facebook post to fans, “…Everything is different on my insides, and I’m learning to adjust to both healing pains and new normals. Time will tell which is which. All the same, slow and steady is my mantra. I have a feeling of gratitude that is consistent, and we’re writing so much new music with YOB that I don’t know how we’re going to distill it all… I wish nothing but love and health, laughs and inspiration for our shared, diverse, unique tribe. For those who have sent me messages, shared love, their time and help with my survival during these trials of mine, I remain ever thankful and count myself as beyond lucky. My ability to weather all of this and continue working is framed by these blessings. We are so looking forward to these shows…seeing friends, watching bands, and getting to share the stage. It’s surreal to be able to do it again. Can’t wait.”