Before heading on the epic Summer Slaughter tour, Dying Fetus is going to release a covers album in celebration of the bands that influenced them in their now 20-year career. Covering some of the best bands in Death Metal history, Fetus’ new “History Repeats…” mini-album will be limited to 5,000 copies and features one new Dying Fetus song.

The EP is due out on July 19th on Relapse Records.

Click here for the tour dates for the Summer Slaughter festival featuring The Black Dahlia Murder, Whitechapel, Darkest Hour, and Six Feet Under.

Maryland death metallers Dying Fetus are currently streaming the upcoming re-issues of 1998’s “Killing On Adrenaline” and 1999’s “Grotesque Impalement” EP online now at DyingFetus.info. Both “Killing On Adrenaline” and “Grotesque Impalement” will be released next Tuesday, March 1st and are available for pre-order at Relapse Records online store here and here.  These re-issues, which follow-up the recent re-issues of Dying Fetus’s “Infatuation With Malevolence” and “Purification Through Violence” albums in January, have been re-mastered, re-packaged to include new liner notes and never-before-seen-photography, and bonus tracks.

Additionally, to commemorate Dying Fetus’s 20-year anniversary and the recent round of re-issues, the Baltimore Citypaper is currently featuring the band on the cover of this week’s (02/16 – 02/22) edition of the free alt-weekly. The cover and feature article can be viewed online now here.

Dying Fetus has also just kicked-off four-week European tour, headlining the 2011 Bonecrusher Fest with Keep of Kalessin, Carnifax, and more. Bonecrusher Fest is an annual tour that brings extreme metal talent from around the world to European audiences. 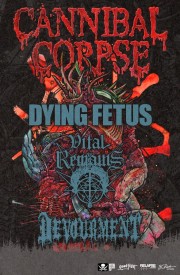 Cannibal Corpse will be hitting the road for a 17 date run that takes the band through the east coast, south, and Midwest. The band will be kicking things off on Friday November 5th in Wilmington, NC at The Soapbox Laundrolounge and will finish things up on Monday November 22nd in Asheville, NC at The Orange Peel. Joining Cannibal Corpse on the road is Dying Fetus, Vital Remains, and Devourment. The tour is being brought to fans by BC Rich, Metal Blade Records, Good Fight Entertainment, and Relapse Records.