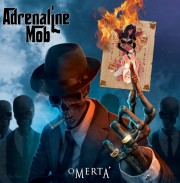 East Coast heavy metallers, Adrenaline Mob, have released the music video for their song “Indifferent” off their debut album “Omertá.” This is the first official music video ever made by the band. Adrenaline Mob has also announce European tour dates for the summer. The tour will last from June 8th through July 8th as the band plays in thirteen different countries.

“Omertá” was released in March 2012 through Elm City Music in North America and Century Media in Europe.