The band had this to say:

L.P.K. Eric is ready to smash faces and will join us for the first time on stage this spring/summer for our run of European festival shows.”

To see the video of their new drummer in action click here. 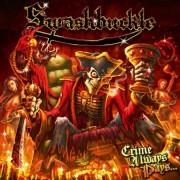 Pirate thrash metallers Swashbuckle have released the cover art for their new album “Crime Always Pays…”  The album is scheduled for release on September 10th through Nuclear Blast Records.