Search Results for "Sick Of It All" 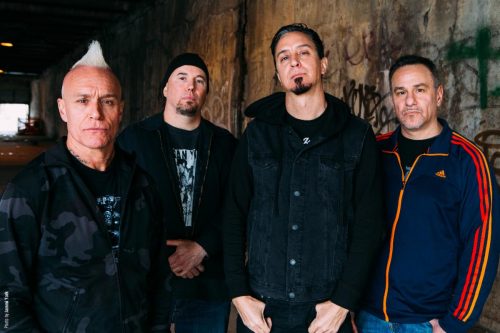 New York City hardcore legends SICK OF IT ALL release their new live video of “Never Back Down” recorded straight from their homes. Check out the video HERE. The track is off their album The Last Act Of Defiance and follows the previous quarantine sessions “Alone“, “The Bland Within“, “Paper Tiger” and “Hardcore Horseshoe“. Make sure to subscribe to the band’s YouTube channel in order to get notified about future releases like the last quarantine clip that will be released in two weeks.
“This Quarantine Jam is a perfect anthem for these times! ‘Never Back Down’! Coming from the ‘Last At Of Defiance’ album. Here’s rally cry to get you through all the shit and the seemingly endless plague. It’s high energy, anthemic hardcore music, rooted in punk and Oi are a perfect fit to the take no shit everyman and everywoman lyrics. A reminder that no matter what they throw at you, keep on pushing, keep on fighting,” states SICK OF IT ALL about the release.
Add to My Radar 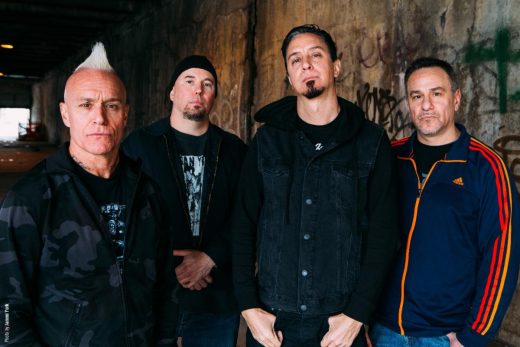 And we’re baaaack. Metal Riot news here with the latest clobberin’ time updates to get you through these hard times. Anthrax have a new bourbon honoring Dimebag (made in my Hudson Valley) for all you boozers to check out. Looks legit! I have been sober six months so I am not gonna fuck that up, but you do you. So for my pick me up, let’s pivot to hardcore!

NYHC legends Sick of it All (and we’re all sick of it all right now, one way or the other), have a new video out for “Bull’s Anthem”. Always one of the all time greats of hardcore to me and many others, SOIA deserve all the love. And they brought some friends along!

“Getting all our fans and friends involved in the making of this video for ‘Bull’s Anthem’ was an absolute blast. We had so much fun going through all the submissions, piecing it together, and being able to bring some much needed laughter into all of our lives during these crazy times. It’s amazing to see so many people united via our music, from all over the world, and joining us in spreading a good responsible message. We want to thank Tim from Rise Against, Chuck from Hot Water Music and the hundreds of participants, for making this happen, and we want to thank you for watching and sharing this video. It’s US vs Them and the time for revolution has come! Support, love and take care of each other,” states SICK OF IT ALL about the music video.

“Bull’s Anthem” is off SICK OF IT ALL’s latest album, Wake The Sleeping Dragon!. For the release, Century Media Records teamed up with Fat Wreck Chords, who put out the CD and vinyl version in the US. The album is available to stream and purchase HERE.

So Flynn – despite being obviously guilty of a ton of shit – skips out of charges thanks to the Baby Sinclair-helmed DOJ’s blatant corruption, I finally get a onetime stimulus check of money Trump and cronies have stolen from us a zillion times over and it instantly has to go towards a pricey car repair and James Woods (of all shitbags I can’t stand) tweeted something accurate about how Cuomo sucks and harmed senior homes. This evening is just obviously destined to serve as an excuse to eat quarantine sour patch kids and chase them with black coffee while rewatching American Horror Story: Apocalypse for the third time. Not to get all conspiracy theory, but Episode 9 “Fire and Reign” (the one with Anastasia that really could’ve used some Dead Again era Type O on the soundtrack) when the Cooperative has a meeting really gets me musing inwardly on how much Elon Musk is a dumb bro who seems to have blatantly been a cheerleader for eugenics during the whole god damn pandemic and, uh, his kid has a really dumb fucking name.  Way to ensure your kid renames themselves John Smith and grows up to play really bad boring pop country just to rebel against you and (probable) Godfather Joe Rogan.

Downset – “One Blood”: I could have used an older Downset video but we need to be united to defeat Coronavirus. This song yells “United” a bunch and it was fun interviewing them for I forget what magazine when this dropped. Wow, over five years ago already. Also, this comeback album did not get enough love. I know it is dumb of me but I can’t stop chuckling about how someone wrote ‘One Blunt!’ in the YouTube comments. The guitar tone is so gnarly and I want to stage dive.

Not exactly a deep cut but why wouldn’t you be randomly blasting this anyway on a Friday night in quarantine before a snowstorm in May, assholes? Prioritize!

Just admit that Biohazard was better than music now. Don’t deny the epic lack of social distancing in the crowd crunchy scenes (but don’t do that shit right now). Long haired Evan is the coolest. I also want to say fuck racism and RIP Ahmaud Arbery.

Sick Of It All – “Take The Night Off”: This isn’t even old Sick Of It All (new SOIA rules too), but Death To Tyrants is an apt title yet again. And we have to keep taking the night off right now to protect people. Don’t believe the bullshit propaganda to get you to endanger others and die for the “economy”.

NYHC kings Sick Of It All are hands down one of the most inspiring bands of all time. Only a knucklehead could overlook the import of the band’s outlook, lyrics, vibe and commitment when it comes to influence on the underground. They are certainly one of, if not the, top hardcore bands of all time and continue to inspire me to keep trudging through the eroding force of modern society with a smile and a helmet on nearly a daily basis.

“Inner Vision” is the dope ass new SOIA lyric video. Let’s try and crank those views up for the boys! I am catching SOIA meets Ignite vibes on this one a little bit, or is that just my half awake ears? This is the first new song from their forthcoming album, Wake the Sleeping Dragon, which is slated for a November 2 release via Century Media Records. Sounding killer so far! Hmmm, too bad the album didn’t come out in time for season 2 of Iron Fist with that title! SOIA packs the hardest punch anyway.

Barney Greenway performs with Sick Of It All 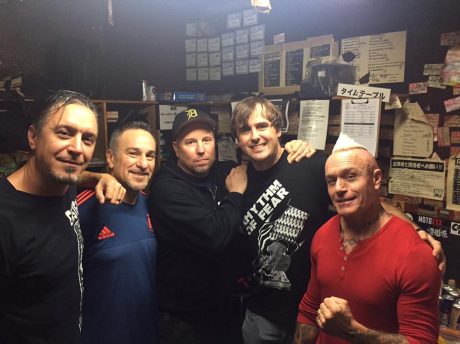 Hardcore idols Sick Of It All have posted a clip of the band performing a stone cold classic “My Life” from Blood, Sweat and No Tears in Tokyo with Barney from fuckin’ Napalm Death on vocals! The crowd is of course loving it. Good times and just what the doctor ordered to cheer you up after a week of deaths in the metal scene.

Album Review: Sick Of It All – Last Act Of Defiance 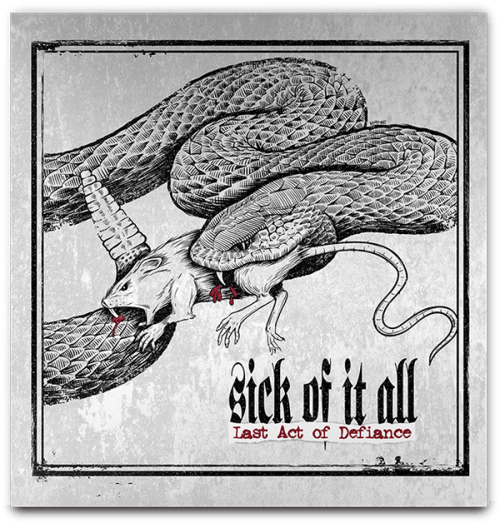 It used to be cool when you’d open up Sick Of It All‘s CD for Just Look Around and see them hangin’ out with Sepultura or whoever and just everyone bein’ cool. Before that you had DRI bring “crossover” most fully (with their album of the same name), and the eventual deathcorn-holed anus of the low end diaper filler breakdown riffs we know and love today. It is not inevitable, however that Rage begets Bizkit begets Deathcore or whatever bad metaphor you want to insert here. I’m not here to trash on anyone.

Sick Of It All need to be celebrated, man. This band simply embody whatever they encompass, be it the more crossover sounds so many fell in love with on Scratch The Surface to wider appeal or the staying power of more straight up hardcore dance-a-thon classic Built To Last. Or the unbridled assault on the issues of the day that was (perhaps still high water mark) Death To Tyrants. Regardless of your favorite era of the band (my fave record is actually Yours Truly, believe it or not), Sick Of It All are on point.

The new album is no different and you should pre order it HERE now! (Though I do wonder why their merch says NY est. 86 but has a Yanks logo when the Mets won in 86′, but it’s all NYC).

We hate when a band alludes to the end in an album title or song name, but it thrills popular culture junkies to know we are watching “The Final Season” of a show and that plot threads will resolve, at the same time. End Hits didn’t turn out to be Fugazi’s last record. The verdict is out on if it was Iron Maiden’s Final Frontier, but I doubt it. End Game would have been a great place for Megadeth to stop before Super Collider. It’s all because an artist has made great works that we hold them to the highest standards, regardlessof if I disagree with some of Mustaine’s politics, for example. I know Ted Nugent can write “Stranglehold”, so even if I disagree with his politics on many issues, I still can seperate the musician and what they espouse. Sick Of It All I simply champion because they stand for real shit, true hardcore and always kick out the killer jams…all while uplifting the community. This is NYHC. This is defiance. But also dignity and grace, hard knocks and all. 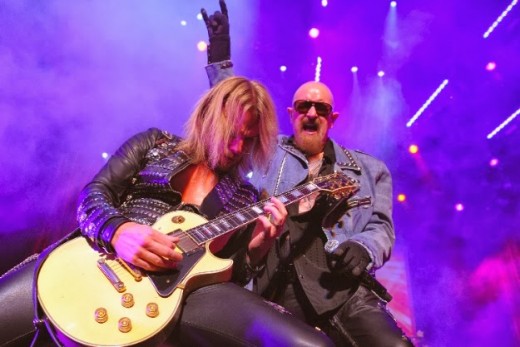 So the Fun Fun Fun Fest 2014 lineup has been released and it is stupid nuts. Not only do we get the first stateside appearance of fucking King Diamond since 2005, but we get a headlining set from Priest (“Halford? I’d blow him” is a t-shirt idea my friend came up with today), Sick of It All, freakin’ Glassjaw, Blood Brothers!!! (I haven’t seen them SINCE a show with Glassjaw, Coheed and American Nightmare in Jersey fuck knows how many years ago), Neutral Milk Hotel , Nas and a ton more. This is gonna be a good little vacation, me thinks!
Click HERE for more!
Add to My Radar

Sick of it All recording new album

New York Hardcore band Sick of it All have began recording their first album since the 2010 album Based on a True Story. The currently untitled album is the bands tenth will be produced by Tue Madsen. The album is set for release by Century Media in September.

More On: Punk, Recording, Sick Of It All, Century Media
Comments (1)   share on: