PRIMUS announce ‘a tribute to kings’ tour to honor RUSH 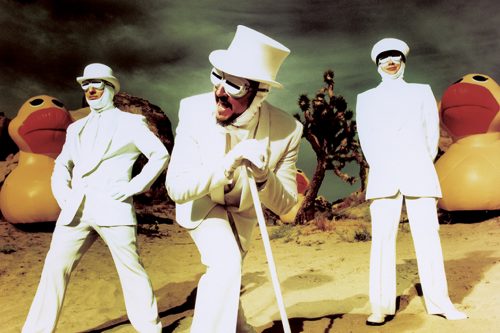 Lot of tour news today from Ozzy sadly having to cancel his farewell dates with Marilyn Manson due to illness to Faith No More and Korn hitting the road with Spotlights, Helmet and others in tow. For me, the coolest announcement was from, uh, the Punchbowl? Alt rock fusion funk metal hard rock blender of weirdness icons Primus are known to have their own legendary take on Rush’s “YYZ” that often segues into “John The Fisherman” and created a nerdy bridge between fun living fandoms many years ago. Shit, due to my age I probably was aware of the cover version first. Anyhow, both powerful trios capable of crazy instrumental prowess and weird ass vocals – of course it made sense. Seriously can you hear  “Hellbound 17 1/2 (theme from)” and not hear some Rush influence?

To honor the late, great Neil Peart we now are lucky to get Les and the gang doing a Farewell To Kings full album tour. Pretty special. Check out the dates HERE.

This summer, #Primus will pay homage to prog-rock legends @rush with a "Tribute to Kings", a cross-country tour that will feature the iconic 'A Farewell to Kings' in its entirety. Special guests @officialwolfmother will be joining the tour, with @theswordofficial and @battlestheband opening select dates. "A little over one year ago, Ler LaLonde and I started kicking the idea around of Primus performing a series of shows featuring an iconic Rush album from our youth," says bandleader Les Claypool. "Being that 'A Farewell to Kings' was the first Rush record I ever heard, and that it contains my all-time favorite Rush tune, "Cygnus X1", the choice narrowed quickly. Years ago, I had done something similar with Colonel Claypool's Fearless Flying Frog Brigade, when we covered Pink Floyd Animals in its entirety. It was an insane amount of work, but ended up being one of the most enjoyable live endeavors I've ever done. Dubbing the tour 'Primus: A Tribute to Kings'; it was originally scheduled to be performed in the Fall of 2019, but when we were asked to support Slayer on their Final Campaign, the "Tribute to Kings" tour was postponed. Geddy, Alex and Neil had been superheroes to Larry, Herb and I in our teens, so when we all became pals while touring together in the early 90's, we were pretty delighted; partially because of the musical geek-out factor, but mostly because the three guys whom we had admired so much from afar, turned out to be truly great, down-to-earth humans, and like us, a tad eccentric. The "Tribute to Kings" tour will be just as it is implied, a respectful and loving tribute to three spectacular musicians, songwriters, legends and friends" A special pre-sale, including VIP upgrade options, will go on sale tomorrow, Wed, February 19 at 10am local time. General public on sale is this Friday, February 21 at 10am local time. Ticket & show info at www.primusville.com/tour

Damn, it seems like a long time since I was rocking “John The Fisherman” on Guitar Hero and even longer since “Wynona’s Big Brown Beaver” was on the radio. Alas, time marches on and along with that, comes a brand spanking new Primus album next month. The San Francisco trio have been on an eleven year hiatus that bassist and frontman Les Claypool comparest to a compost pile: “Like a good compost, we needed to ferment and turn the manure and garbage into fine, nitrogen rich dirt.”

“Tragedy’s A’Comin” is now streaming online and “Green Naugahyde” is due out September 13th on his own label, Prawn Song. “Lyrically, this is me focusing on eventual demise or at least the notion that big rain is coming and at some point I’m going to get pretty fucking wet,” Claypool says. “Who says lemmings can’t dance as they go over the cliff?” Check out the song here.

The band will also be heading out on tour next month as well. Click here for tour dates.