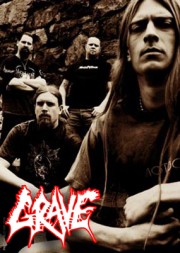 Swedish death metalers Grave have released the dates for their upcoming North American tour. The tour will last from August 30th through September 22nd. Click here to view the full tour schedule.

“We are very happy and psyched to announce that we have signed back to our old trusty workhorse Century Media Records! After some while of negotiations and a meeting in Dortmund/Germany the week before we played Death Feast Open air, we finally sealed the new deal. The future plan is to have a new Grave studio album out in 2012 and we will start putting the pieces together for that this fall, after the headlining tour of North America. We are truly looking forward to working together again with some of our old friends as well as all the new staff in the CM offices worldwide!”

Click here to read the press release and comments from the label.

Norwegian death metal act Blood Red Throne recently signed with Sevared Records, and announced that they are entering the studio to record their first album on the new label.

The band comments on the studio update:

“Sunday, 22nd of May, we start recording our sixth and most promising album ever! 9 killer tracks of pure groove and brutality and also a cool cover song.”

“The album is being released late august before we go on our US tour with Grave. We also welcome Ivan Gujic as our new and permanent rhythm guitarist. Let the madness begin!”

Stay tuned for more updates on the new album. 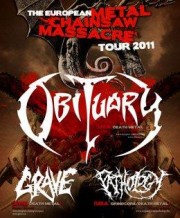 Swedish death metal pioneers, Grave, have posted dates for their coming tour of the U.S. with an additional 6 shows on Canadian soil. This is Grave’s first headline tour since the mid-90’s and supporting acts include Blood Red Throne (Norway), Pathology (US) and Gigan (US).