Jeff Becerra, of formative death and thrash metal band Possessed, has walked again thanks to robotic legs for the first time in thirty years since an armed robbery in 1989 left him paralyzed from the chest down. In the decades since, Jeff has performed in a wheelchair and lived life that way.

The Seven Churches, Beyond The Gates and Revelations Of Oblivion main man shared a clip of himself in a medical facility during the personal moment. 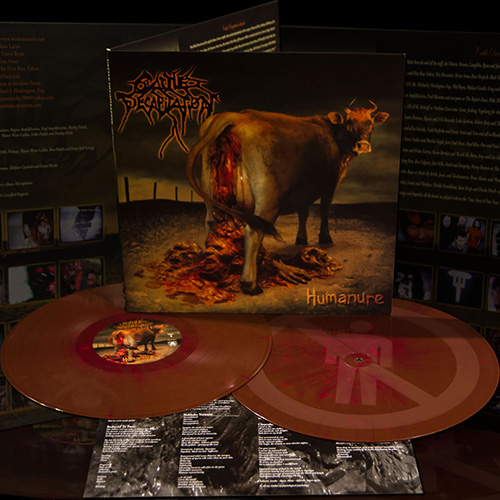 Cattle Decapitation‘s “Decade of Decapitation” vinyl series continues with one of the band’s most infamous releases: “Humanure.” Fans will surely enjoy the “bloody stool” vinyl color, which features red splattered on brown. This is the second piece of vinyl in the series which celebrates 10 years of releases on Metal Blade Records. Purchase the previously released “To Serve Man” and pre-order “Humanure” now at indiemerch.com/metalbladerecords.

The band’s entire Metal Blade discography: “To Serve Man” (2002), “Humanure” (2004), “Karma.Bloody.Karma” (2006), “The Harvest Floor” (2009), and “Monolith of Inhumanity” (2012) are all being prepared in lavish gatefolds for release. The colors, handpicked by the band, reflect the concept or color scheme behind each album. Fans will also have the opportunity to pick up a collectable box that comes with brand new art from longtime Cattle Decapitation cover artist, Wes Benscoter. Additionally, “To Serve Man”, the band’s debut full-length, and their sophomore effort “Humanure” have been remastered specially for this release. Each vinyl will be released separately in the coming months and all vinyl will be available for the first time ever in Europe.