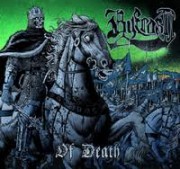 Norways blackened thrashers Byfrost streams two new songs off their upcoming album “Of Death”, wich is set to be released on June 27th via AFM Records. Click here to listen to the songs, “Of Death” and “Buried Alive.”

Byfrost recently signed with AFM Records, and this will be their debut on the label. “Of Death” is the follow-up to their 2010 album “Black Earth” released on Painkiller.