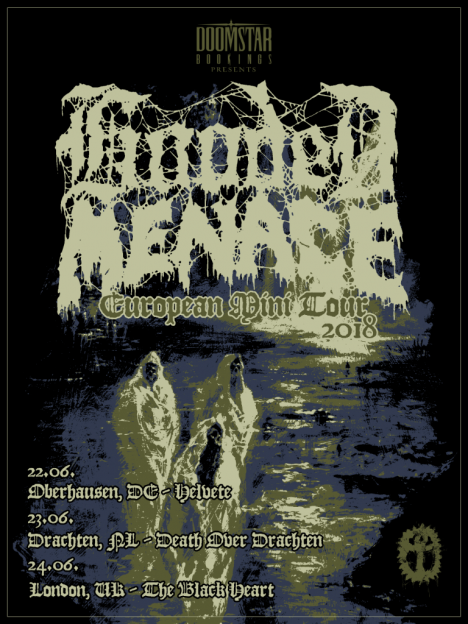 Finland’s death/doom overlords HOODED MENACE have announced a string of European tour dates this summer. The mini tour kicks off on June 22 in Oberhousen, and sees the band playing at Death over Drachten in the Netherlands. A full list of dates can be found below.

HOODED MENACE are touring in support of their new album, ‘Ossuarium Silhouettes Unhallowed’. Their most ominous, dark, and mature album to date, ‘Ossuarium Silhouettes Unhallowed’ sees HOODED MENACE expertly weave dreary funereal atmospheres with dark melody, which only adds to emotional gravitas of what is sure to be one of the heaviest albums of 2018.

Hooded Menace’s “Darkness Drips Forth” will ooze stomp you flat 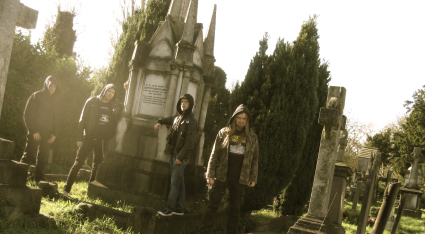 Fall is here and October is nigh. Peter Steele’s month of choice, this October will undoubtedly be a rad one for the unrusting genre of metal as we have our Metal Riot Creature Honeymoon comp coming out on Halloween via bandcamp, but there’s more! Hooded Menace‘s Darkness Drips Forth would ensure a kick ass October even if it was the only metal record to come out at all that month! The four song Relapse release is due Oct. 30th and can be pre-ordered at Bandcamp HERE.

This release couldn’t be more worth your while, melodic guitar threaded doom n’ death with a titanic rhythm section that creates a steel framework to prop up the band’s bold and apocalyptic city of sounds. Each song stretches well past the attention span of the average troll, yet you don’t need to muster resolve to keep listening as you’re swept up in the avalanche and carried along. It will take hardy souls to survive the onslaught, but it’s a worthwhile endeavor. From “Ashen With Solemn Decay”, which features writhing, hoarse vocals and complete guitar surrender akin to Baroness jamming with Novembers Doom, to key track “Elysium of Dripping Death” (which you can hear now), you will be left floored and riff whored. 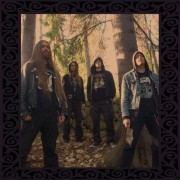