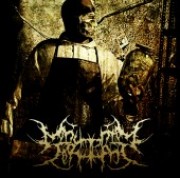 Russian death metal band Monumental Torment has finished recording their debut album, “Element of Chaos,” which is set for release next year on SoulFlesh Collector Records. The album was created in different studios from around the world, because the band is not all from one central location. The band had this to say about recording the album:

“It was not an easy task completing an album with members on different sides of the globe. It took time, dedication, and a high amount of communication but we have made an album we are proud of. For the album, every member of the group had to step up their level of musicianship and technicality.

Ioann learned to play the piano, Artem focused on technique and precision, and Lloyd worked on his tones and technicality. After all the hard work, we hope you will enjoy it as much as we do. We have done all of this for the fans, we love you and consider you a part of our group.

Before the entire album releases, we are going to release a single for you to hear, so stay on the look out brothers!