Ohio black metal act Acheron have signed to Listenable Records. The band will be releasing their first album, Kult Des Hasses, since reuniting after a brief separation in 2010. Kult Des Hasses is a follow up to the bands 2009 The Final Conflict : Last Days of God.

Acheron have been together for over two decades and seem to have been displeased with their representation in the past. You can read comments by Acheron founder and frontman Vincent Crowley below:

“Acheron has been a thriving entity for many years now. We never got a proper push from any of our past labels to get to the next level. The band has received a lot of interest within the last year. When Listenable Records talked with me about signing ACHERON, I was indeed interested. The reason being is that he was a fan of Acheron a long time ago. He believes in our music and wants to finally give Acheron the push we deserve.’We are not just a band, we’re a fucking diabolic War Machine!'”

Chilean extreme metal act Thornafire have debuted their video for “Deconstruccion” off of their most recent album “”Vorex Deconstrucción.” The video comes nearly two years after the album’s release and was filmed, edited, and produced by Danile Duarte (Execrator). The bassist and vocalist for Thornafire, Alexis Munoz, described it as a “futuristic song inspired by the religious and social decline experienced in the current era Eon oh Hourus.”

“Vorex Deconstrucción” was released in July of 2009 on Ibex Moon Records.

Check out the new video here!

Comments guitarist Alex Bouks of the band’s latest output: All of us in the Goreaphobia camp are real excited about finishing the new record. The new tunes will once again contain 1000% occult metal nihilism! The only way I can describe our new endeavor is that’s it’s very diverse and takes us back to the band’s roots. Jim has once again recorded and mixed the record at his home studio, Neanderthal. Apocalyptic Necromancy also marks the debut of our new guitar player VJS. There’s a highly positive and magical vibe for the band at the present time. For me, this record is a true progression from the song writing and production on Mortal Repulsion.We hope to have it out soon for all our long time and newer fans.

“Apocalyptic Necromancy” will be released later this year. Further details to be announced soon.

After more than half a year apart, Ohio Black/Death/Thrash Metal group Acheron have reunited, according to a statement released by founder/bassist/vocalist Vincent Crowley. The band separated in May, but have since been able to work out all the issues that existed between the band members.

“I really didn’t think I would do Acheron again. Before the band broke up I was working with a talented bunch of new musicians, but the vibe just wasn’t there. I couldn’t play without having that vibe. Now that almost everyone from the last studio lineup has agreed to work together again, I am totally on board and open to any ideas regarding this musical entity! I am happy as hell that we were able to put aside the unfortunate B.S. band politics/drama that sometimes can arise; hell, even worse when you’re not even sure why it even happens. Especially when Vince and I, who have been jamming together for 10 years and have been friends even longer, are able to continue to go forward. It is a great metal pleasure to announce that we are going to be able to play for the Acheron friends and fans and to continue working forward on the next piece of pure aggression that we call Acheron. Yes, we will be moving at our own pace, but the important issue is that we will be moving forward. Late last year we were working on new material and can’t wait to bust out the rehearsal tapes and start reviewing our next installment of Blasphemy and Apocalypse.”

The band has announced that they aren’t rushing into anything and are taking things a step at a time. The band’s latest album was a cover album titled “Tribute To The Devil’s Music,” released in 2003 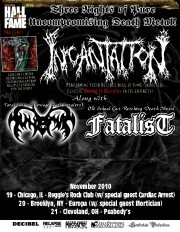